Teaching abroad is quite exciting, but the preparation work before embarking on such a journey can be overwhelming and confusing. The most essential factor to have a successful trip is to have your finances well managed. It’s fine if you forget some clothes or to pack certain belongings. Yet it’s an absolute nightmare if you arrive in a foreign country without enough cash or usable payment means. This comprehensive guide will help you with everything you need to prepare your finance while teaching abroad: from managing your expenses to setting up the right bank account, paying taxes and more!

Before embarking on your journey to teach English abroad, make sure that you have the means to pay for your expenses initially before getting your first paycheck. When evaluating a foreign bank account, understand its location of branches globally or in your destination, location of ATMs, as well as its ATM fees, foreign transaction fees, and all other relevant fees. Does the bank offer currency exchange services? How easy is transferring money to or from your home country with that bank?

If you’re from the United States, a popular option for travelers is Charles Schwab checking account. It lets you withdraw cash from ATMs all over the world (that take VISA cards), using the local bank’s standard currency exchange rate, without charging you any fees. Not even ATM fees! Though you’re charged an ATM fee while withdrawing cash, Charles Schwab refunds you all of such fees to your checking account at the end of each month.

You should look into foreign transaction fees, travel points and travel-related perks the travel credit card offers to choose the most rewarding one. Before traveling, you must notify your card issuers so your cards work abroad.

A traveler’s check is once popularly used by travelers since it’s safer than cash. The bank that issues traveler’s checks insures you against lost or stolen checks. You can use traveler’s checks to purchase goods and services or to exchange for cash. Traveler’s checks are not linked to your bank account, thus eliminating identity theft risks. However, fewer vendors are accepting traveler’s checks, giving in to the rise of travel credit cards and prepaid debit cards, or even digital currency. 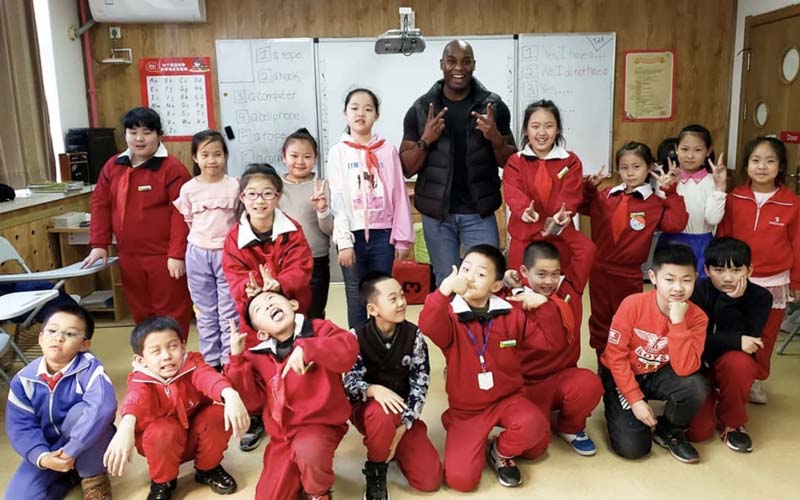 Exchange rates are constantly changing, thus worth being paid attention to. It’s good to monitor changes in the exchange rate leading up to the date of your departure. You can take advantage of when the USD is strong compared to the currency of your destination country to do currency exchange.

For the expats from the United States, you are subject to double income tax while working abroad to both the country you work in and to Uncle Sam if you’re making over around $115,000 per year. Here’s an example of income taxation in China. If you’re an online teacher, you’re considered an independent contractor by the IRS. Thus, your tax is around 15% of your paycheck. As a foreign teacher, you still have to file a tax return and pay taxes to the U.S government. Depending on where you’re teaching, you may have to pay local taxes in that country as well.

However, you can exclude or deduct certain foreign housing and moving expenses, as well as get a foreign tax credit that can be used to offset foreign taxes assessed by the country where you’re teaching and receiving your income. Thus, your tax obligations in both the U.S and in the foreign country you’re residing in will be minimized. So, though you may not have to pay any taxes to the U.S after all the deductions, you MUST file a completed U.S tax return to the IRS to avoid any interests or hassles in the future.

It’s recommended that you ask your future employer about tax rules for foreigners in their country before signing your employment contract. The percentage varies upon countries. Some automatically take out the required taxes from your monthly paycheck, while some require some paperwork and tax office visits. The tax season is also different in each country. Find out all the necessary answers to avoid tax-related headache once you get there.

Managing Your Expenses While Teaching Abroad

Last but not least, make a financial plan for your living abroad journey. What are the initial expenses that you’ll need when you first arrive? Here are some ideas:

Secondly, plan for your daily expenses once you start working. Your ESL teaching salary should be enough to cover your expenses living abroad. However, if you have a student loan or other debts to pay back home, you should have a strict financial plan to stop yourself from overspending. In some countries, your employer’s likely to pay for your housing and insurance, thus all you need to pay for are food, transportation, entertainment, and other daily expenses. Those teaching ESL in Japan, South Korea, or in big cities in China, are often able to save quite a lot. Even in less-developed countries like Thailand and Vietnam, since the cost of living is relatively low, even with your smaller income, foreign ESL teachers can save up as well.

Here are some amazing tips so you can better save up while working as a foreign ESL teacher:

You may need to transfer money from or back home at some point while teaching English overseas. It isn’t quite easy in some countries, especially China. Thus, explore your options before you go. You should also understand the transfer fees, exchange rates, and the time it takes to actually receive the funds. Here are some popular channels to transfer money internationally: PayPal, Payoneer, TransferWise, OFX, and Western Union.

You must consider a few factors before choosing the right money transfer option: